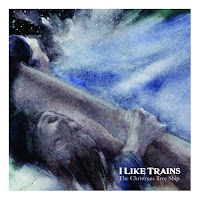 Iliketrains is a great exception for the postrock-genre. Postrock is mostly instrumental with scarce chanting / lyrics adding to the emotions of a song. Iliketrains is full of the storytelling vocals of David Martin who does a splendid job. In contrast: 2008 marked a year where Iliketrains released a fully instrumental EP called The Christmas Tree Ship, which is a fantastic emotionally moving album with two absolutely worthy Must-Hear Postrock tracks! Details inside.
The album "The Christmas Tree Ship is based on a story about a group of ships that sunk in Lake Michigan, with no survivors. The ships were transporting Christmas trees. The captain of one ship managed to leave a note in a bottle and was found later on. You can read the whole story here

Based on this tragic tale, Iliketrains produced a 5-track album that's one of the most emotionally moving EP's I have ever listened within the genre. Two tracks are worthy of praise:

1. South Shore
This track is a continuation of the first track and gives the listener a slow, easy listening guitar tune and slowly adds a lot of extra layers for pure emotional bliss. I feel sad, melancholic and emotionally moved because of this track. Listen to it below and be sure to read and listen to the second great track of this album.


2. Friday, Everybody goodbye
Note: I didn't know of the background story untill today, while I researched the internet. The second must-hear track is the climax of this album, called "Friday, everybody goodbye". Tragic despair is what I feel... this isn't a tale that ends well, but to be sucked in the emotional power of this tune is a wonderfull expierence that I can recommend to all Postrock / Iliketrains fans.

The album The Christmas Tree Ship isn't all that well-known, even for Iliketrains fans. It's an odd experiment for the band, but I can't recommend this album enough. Take a seat, find a good set of earphones, grab a Whisky, listen to this album with your eyes closed and live the story.
Iliketrains Must Hear Postrock