The festival is what it is for years now. I know what to expect and every time, Dunk doesn't disappoint. Please Dunk, don't ever change.... Some improvements were made though: more water points, they once again upped the lights on stage (wow!) and lovely live streams of almost every show (and I hope they will become available on YouTube / Vimeo.) Dunk! festival feels like home away from home, where people meet and socialize, where people respect other people's stuff and the environment. A place where people share a common passion: love for great music. Dunk feels a bit like the Gaulish village of Asterix and Obelix where the magic potion is a combination of great music, equality and amazing people. A bold place that stands the test of time against commercialism. A place where a small Belgian village full of amazing volunteers work their asses off to make Dunk a succes. 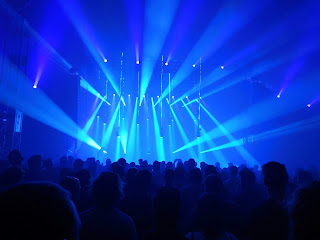 My only critique is the headline choice on Friday. After Earth and Swans during earlier festivals, you can imagine that the choice of Efrim Manuel Mannuck wouldn't fare all that well. Ending on a high after a fantastic day at the festival would be much better achieved by booking a different headliner. Once again, the Friday ended a bit as a slowly dying candle which is a shame. I guess this gig would be much better at the forest stage but hey, it's all suggestive and for fans of Efrim, this was a great opportunity. 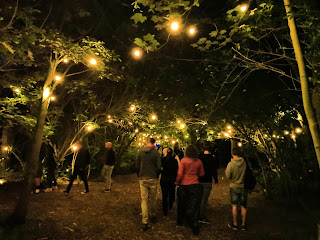 Enough for now, onward to some comments about different bands. First of Baulta! How I enjoyed your energetic show and your sheer happiness of performing at Dunk. On Friday and Saturday, I spotted you guys a couple of times and it made me so happy seeing you guys enjoy your time as a visitor at different gigs and at the after-party with DJ Fries. If you want to listen to some great Postrock but can't make up your mind, Baulta is the one band never to disappoint. Great music, great guys!

Celestial Wolves at the forest stage. A fantastic atmosphere, with long and energetic tracks and a great sounding drumsnare. Your EITS cover was excellent too. (Update: this was not an Eits cover, it was their own track called Re-Entry )

A Swarm of the Sun, a live set that made lots of risk due to the composition of tracks. This show divided the crowd but those who stayed, got their reward in spades. It looked as if the lead-singer was nervous like hell but he got it under control and ultimately, the band delivered an emotional show that truly fit the bands identity.

Kokomo, damn what a crazy-ass show that was. This was the headline show of the day, without it being the true headliner. Lots of energy on stage and in the crowd, it was messy, fun and interesting. Balloons found their way into the crowd, a crazy dude from Her name is Calla made a surprise guest appearance ruining an otherwise great new track.... but if was fun!

Paint the sky red delivered a show that was a perfect fit for the Dunk festival atmosphere. Lovely tunes with positive vibes in spades. They really got the sympathy from the crowd and it was touching to see the sheer amount of love from both sides.

Silent Whale becomes a dream: a show like no other..... I think I had my eyes closed for 35 minutes in a row, drifting away on the quieter tunes and let those crushing and epic climaxes wash over me. I had the same feeling as watching 2001: A Space Odyssey and "Interstellar" during this show. goosebumps all over, this show was just one long apotheosis... Transcending stuff that just hypnotized a lot of people.

I wish there were some more bands that I have a passion for, but the good thing is that this edition made me realize that there's nothing that "needs to be done". I spent a lot of time just sitting and talking with some great new and old friends, sipping a lovely beer, enjoying the weather, cracking some peanuts, all while having some great music in the background. I took it easy, didn't force anything and had a blast... which I''m sure will be repeated in 2020. Thank you all and see you next year. 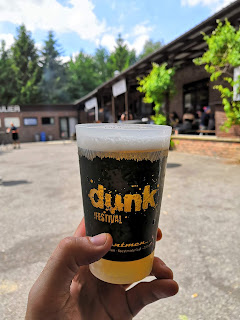