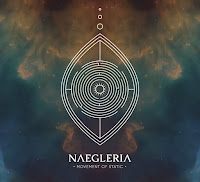 Wow, it's been a long time since I reported here on this site. but hey, got some inspiration so I would like to share some new bands and music with you. Discover some great new Postrock music right here!

Let's start off with one of the better submissions I recently received. Movement of Static  from Greece just released their second album Naegleria. A rather ominous title, as the album title refers to an "Amoebe" which can infiltrate ones nose, into your nervous system and "eat" your brain. Ha, there's that! The Postrock / -metal tunes that this album inhibits, is excellent. It's raw, loud but very melodic that should consume your brain when you hear those guys live. It's not always shredding guitars thrown at you, it knows when to quiet down and speed up again. The (spoken words) interludes offer some breathing room, before another epic track begins. If you're in the mood for powerful postrock, this is right up your alley. Enjoy!

2.  Sejd
From Sweden, this is Sjed. They are in the proces of  releasing their new album called "Ben & Hjärta" on October 18, that's tomorrow! The streams on Spotify etc will be available from November 1st. Upon first listening right now, the long and rather good 1st track (14 minutes!), I hear an appealing mix of uplifting Postrock, some chanting and most of all: a dreamy atmosphere with lots of nostalgia. I don't know if these guys are happy with this, but this could be a spin-off from the band EF. It just has a bit of the same Postrock style and structure. I don't mean that as a bad thing (it's quite good actually!) but I think it's a bit of the Scandinavian style of Postrock. Same thing from Postrock made in the US and in Poland, there;s a distinct vibe and sound to those regions. Their upcoming album sound a bit more brash / louder than their first release. Be sure to check it out on their Bandcamp page and from november 1, on Spotify! P.s: their first album is on a "name your price" amount on Bandcamp, excellent!

3. Gavin Miller - Shimmer
A new release from the "Sound in Silence label", so you can expect soothing, ambient-esque tunes. This release by Gavin Miller is definitely up there. Sit on the couch or lie down and let this new album wash over you. This will sure keep you in a relaxed state and all your problems will be temporary gone. It's an album that's split up in different parts, butactually is one track of a whole. A fun thing: while listening to this album, I heard my one year old daughter blabbering a bit in her sleep through the Baby monitor and those noises really suits this music! The way this album develops from part 3 is rather magical!

4. Celestial Wolves - Call of the Void

The artwork for the new album of Belgian based Celestial Wolves"  suggests it's a book full of magic and spells. Match this with the concept of this album, which is the urgency for people to do what they don't suppose to do, should make for an interesting listening session. You know what to expect and that's heavy guitars, some riffs, synth tunes and stoner vibes. It's decent stuff that will appeal to people who like the rough stuff within the Postrock / post-metal range.