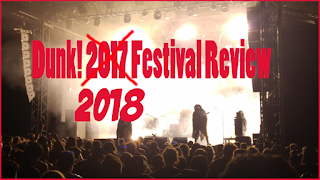 
If you just want to listen and watch: Here's the link to the Dunk!2018 live recordings playlist!

My 2 cents....
You know, I'm always a bit sad but mostly melancholic when I leave the Dunk festival every year. That beautiful, beautiful small Postrock village inhabited by lovely people, cool bands and the fantastic Dunk volunteer community that's the backbone of everything that's Dunk! It's the best compliment I can give Dunk, it's a way of life that can be experienced a couple of days a year and it's awesome. Dunk! 2018 hosted bands like Ranges, EF, Caspian, Soup and Tides of Men. Enough for every Postrock lover to skip a heartbeat and all in that small village of Zottegem... Like Tides of Man said during their show: "You guys have a Postrock festival here, do you feel you are winning!?" Yes indeed: we are winning!

Without further ado, here are the bands I've watched and recorded. Enjoy my couple of lines and the videos!

A band that got quite a lot of attention in 2017, but they passed me by somehow. A couple of weeks ago I started listening to their latest release "The Ascensionist" and it's a great album, so much atmosphere. It was a lovely performance with "Seven Veils" as a personal highlight.

Ah, Swedish based EF one of the Postrock bands that I spin the most at home. Their album "Give me beauty give me death"  is brilliant. The first two songs were a bit of a miss with the chanting gone wrong. I felt like the crowd wasn't ready for this. Eventually, they got their act together and when EF is on fire, holy smokes... beautifully emotional tracks with great crescendos. The atmosphere at Final Touch / Hidden Agenda was fantastic and the drummer got all of the crowd down on their knees for a lovely segment in the track. You can watch below!

Caspian, the fantastic Caspian. My conclusion at the end of their set was: At Dunk you have other bands and you have Caspian! It's clear that those guys are on a different level. Such skill-level, this is art! Playing some stuff from the album 'Waking Season" is a nice throwback to that album, but the tracks from "Dust and Disquiet" sealed the deal for me. This a band that truly delivers as a live experience. The already fantastic tracks receive some extra spice and will leave you gasping for air.

Poland is a winner in the Postrock genre and you can add Besides to that winning streak. Classic Postrock that's expertly crafted and results in an enjoyable live show.Some softer segments for some breathing room, until they shred their great sounding climaxes.

Eclectic trio Wyatt E from Belgium is a band that's "on repeat" but the more experienced listener hears  much more. Endless repeating riffs with constantly added loops / pedals / soundscapes create a hypnotizing show. P.s: congrats for the forest stage Dunk, the atmosphere is astounding and the climate is perfect. In the evening, there's magic over there.

My most anticipated live performance on Dunk!2018 festival. Their album, "Remedies" was the best album of 2017 so expectations were trough the roof! They mostly delivered. It's a band that asks some patience from the visitors. With every song, SOUP tells us a story and to fully enjoy, you have to open yourself up and be patient. It's not a safe bet, where shredding guitars ensure that the crowd stays engaged with a band. Their first track "The Boy and the Snow" had some troubles in the sound department, but they recovered and played a great show. No "Going Somewhere"  alas, but set-finisher "Clandestine Eyes" gave me goosebumps for 10 minutes. After the show I talked to some friends and they all experienced that one the same. A rough start, but ultimately a great show!

SOUP is working on something so they kindly asked me to remove the videos, which I've done.

If there's one band that shuddered the forest stage and Zottegem, it's UK based Telepathy. Damn, those riffs are heavy. These guys played as if their lives depend on it and that energy resonated with the crowd. It's a lot to take in, but their energy combined with the almost mystical forest stage at this hour (around 22.00u) it was so good! We can almost forgive the fact that they mentioned the wrong festival ;-)

This band from Canada had such positive vibes on the stage so they quickly had the goodwill of the audience. It was a solid set with some fantastic build-up and atmospheric soundscapes.

Chinese based Zhaoze but some asian flavour to the Postrock genre. for me, they sounded a bit like Mono / Mooncake, with the added Guqin, a horizontal string instrument well suited for plucking those strings (forgive my description). It';s an interesting take and was a nice diversion to the "standard" postrock set-up.

"We Were Only Dreaming" was one of the highlights of 2014 and should be a great album for a live show. Finally, they played on Dunk! festival, after playing at Dunk's brother in America. The short but epic track "Desolate.Magnificent.  was a great opener, followed up by two new songs from their upcoming album release in July and that's exactly where the show fell a bit flat. They use some creative tempo and rhythms so it's difficult to "get" into the rhythm. Lucky for me, they played "We Were Only Dreaming, had a broken string (fixed it right up! :)  ) and then played some new tracks that were grand / epic and atmospheric. My trust was regained and I enjoyed the hell out of the rest of the show. Wow. Set-finisher "Young and Courageous" was raw and beautiful and should count as my best recording of this festival. I was on a high, with goosebumps all over.

And that's a wrap for me. I visited less shows than normal but more enjoyed the festival as a whole. It's a mini-holiday, where I see some great friends who all share their passion for this music and this way of life. It's like the small village in the Asterix comic, where the inhabitants proudly stand together to fight the romans. It's so great that a festival like Dunk can exist in times of commercial "sharks" eating up all that's alternative. Let's hope the magic potion will stay available for the next 20 years. See you next year in Zottegem!
Appalaches Besides Caspian Dunk 2018 Dunk festival Dunk2018 festival EF Live Postrock Postrock Reviews Ranges Soup Telepathy Tides of man Wyatt E Zhaoze