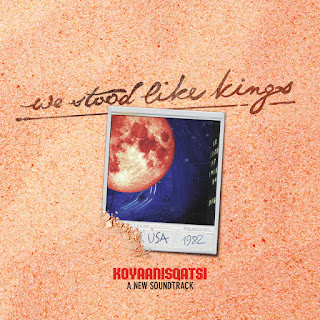 This Belgian based band is high on piano and movies. With the album"USA 1982", they made a completely new soundtrack for the movie Koyaanisqatsi and that's exactly what we got today: the full movie and soundtrack by We Stood Like Kings.  Imagery and Postrock always work well and We Stood Like Kings delivered. Sometimes cosy and soft, sometimes raw and loud, We Stood Like Kings played a set that's almost like classical music (certainly with te same intensity), but with a heavy guitar and drums. It's Neo-classical stuff that suits the movie well.  Truth to be told, it lasted a bit too long as this music and imagery requires very focused attention. Just wobble your head on a relaxing tune is not available here, due to lots of shifts in rhythms and styles. I enjoyed this gig and I have a lot of respect for the musical talents and artistry that's at the core of We Stood Like Kings.


Well, SPOIWO, the second time in W2 poppodium within a year, what a treat! I just love these guys. The heart warming messages to the crowd included. It's such a fun band which creates a dark and cinematic atmosphere. Double synthesizers are the shit..... excellent stuff. Their live gig sounds a bit more heavy and raw, but that's the way a live show should differ from the studio album. An excellent show and I'm looking forward to new material from this greatly talented band from Poland.