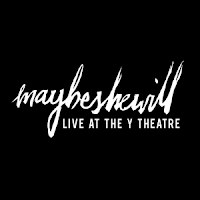 What's great of a live performance from your favorite band (besides live music!) is the intensity of the artists playing. Maybeshewill just released a 45 minute long video of their last show from their I was here for a moment and then I was gone  tour. The epic finale was in the Y theatre at Leicester, their city of origin. Review + media inside!


I saw Maybeshewill two times live. Once in Hasselt - Belgium and once in Tilburg - the Netherlands. Their kinetic, uplifting, pounding beats and sound is best experienced live. This video is a great way of showing and sharing the intense performance of Maybeshewill playing live.

Let's get straight to the point: this video is the next best thing of experiencing Maybeshewill. Big kudos to the dudes that fixed the sound quality of this performance, because it's utterly brilliant. You know when the sound is great if you can hear the individual instruments very clear, without losing the focus of the instruments combined.The keyboard tunes are crisp, the bass guitar has that extra "oomph", the shredding guitars are loud, and each drumbeat really thumps. Combined, it's a great simulation of the kinetic music of Maybeshewill that really kicks in when you see and hear them live. This video delivers in spades!

Set-opener Opening+Take This to Heart features thrilling drums and great bass-riffs. It's a great way showing off the fantastic listening-experience you'll get by watching this 45 minutes performance. Co-conspirators  from the Sing The Word Hope In Four Part Symphony - album  has those great small start-stop segments where you can feel that the band is a whole. The timing is excellent and man, the drummer has a lot of hard working to do!
After this classic track, there's a short intermezzo where you can enjoy some travelling scenes made by the band. There are some travel outtakes while driving through a mountain area and you see the band soundchecking. This intermezzo sets a calming atmosphere and prepares your for more musical violence of the live set.  I like the dream-esque scenes and the soothing sounds accompanying these images.

Now we're ready for the second segment of the set. "Old skool" track The Paris Hilton Sex Tapes kicks in before fan-favorite Critical Distance starts. Old meets new is the thing here and it works pretty good. The former song is loud an chaotic, where the opening of Critical Distance is nothing short of hypnotizing. I like the extra added bells-effect by the drummer and the slight guitar alterations that don't appear on the album version. It's a fantastic track to listen to. And as always, the bands' energy is great!

Another golden old track appears: ...In another Life, when we are both Cats. It's one of the more experimental tracks by Maybeshewill with lots' of different rythms and effects. The drums and keyboard tunes accompany each other in great fashion. This track marks the end of the second part and it's time for another soothing intermezzo for some quiet tunes and surreal atmospheres. The combination of snow and piano is especially nice!

The third and final segment opens with Accolades, which has some of the most brutal segments for the drummer and it shows. This guy takes some serious breaths when he's finished pounding his instrument. Red Paper Lanterns is a great follow-up with a more coherent style and waves of keyboard-effects. During the opening of the song, you can hear a slightly more raw bass-guitar than on the album version which is a nice touch.

The track to officially end the tour for Maybeshewill is To the Skies, form a Hillside.  A track that shows the brute force that Maybeshewill can be. The keyboardplayer has some serious neck muscles. My head would separate should I do a 45 minutes headbang-session like him. The drummer uses his last energy and is lost in thoughts.