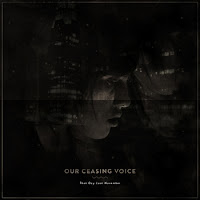 Our Ceasing Voice (OCV), one of the first great bands I discovered when I began this website. God is an Astronaut, Atlantis and OCV are the bands that started my Postrock love. Almost ready for release is the newest and biggest project for the band. That Day Last November is here! Read the review.


Let's start off with a powerful feeling.... In preparation of this review, my grandpa died. I listened to this album a lot already before I heard the news, but I couldn't cope it for a few days when I heard this tragic news. The theme and, to a large extent, the overall atmosphere gave me an uncomfortable feeling during those days. It simply reminded me too much of the state I was in and that's the biggest complement I can give to this new work of OCV. This work of art screams of fear and loss, kicks you in the gut and gives you a melancholic feeling that everyone who has experienced grief, loss and sadness will recognize. It also shows this state of mind can be hauntingly beautiful at times.

Ok, enough for now, let's talk about music! This is the biggest and most professional album of OCV to date and it shows... great collaborations, professional recording and mixing and a coherent theme for this album, makes "That Day Last November" an album that you really have to listen to a couple of times. Sounds cliché, but at first, this album is not suited listening on your headphones while travelling to work. The music is too richly layered and atmospheric to appreciate it as background music. That Day Last November is a concept album with a main theme that flows through all tracks and needs to be heard full, to appreciate it.

Opener "Afterglow" which, ironically, was intended to be the album finisher, sets the mood for the album as a dark ambient, spacious, metal-esque track. It starts of slowly and after 2 minutes, the track erupts in great hailstorms of guitars, thumping drums and ear-penetrating vocals. The whispering sections can send shivers down your spine and the utter feeling of despair is there.

The second track is "Untill Your Chest Explodes". It's the most mainstream song of the album and is featured as the first official single of the album. It's easy to understand the decision by OCV, because the track features great story-telling singing of Matthew Ryan, easy listening instrumental sections and some great chanting at the end of the track. It's a track that's pretty easy to digest in spite of some dark lyrics ("I walk the streets, these dead end streets. My head aglow, wanna go, where no man should go") . The fully featured clip can be viewed below!

Track 3, "One of these Nights", is a combination of a sometimes curious, gut-wrenching, but inevitably, epic song. The whispered spoken words and slow synth ambient in the beginning hammers its way inside your head when listening in quiet surroundings on high volume. After a couple of minutes there's a slow build up of a trombone and piano sparkles that's very melancholic and is a true evidence that this album isn't always suited as background music. It transforms into a blasting / shredding guitar track with waves of different guitars that's so different from the whispering section in the beginning, but really "clicks" as a whole.

One of the more chilling tracks is the almost classical orchestra-esque track "What used to be a battle song" This is one of the tracks that gave me the uncomfortable feeling I mentioned in the first paragraph. It's dark, almost end-of-the-world postapocalyptic with slow tunes and near-grunting at the final section.
"The anniversary" starts hopeful with café-like sounds in a busy place with buses stopping in front. The second vocal layer of a woman gives an extra warmth to this track where (at first) the singer tells us a pretty positive story about wanting a life that later, he will never have. It's the story about a couple in a café that explodes and sets the central theme of this album. What happens after that? What are your thoughts? Your feelings? Will time heal all wounds?

The album makes a small drop in the next 2 tracks. "The City that once had a Name" is the most recognizable OCV track on this album. It features the well known synth sounds and guitarpitches that defined OCV in the past. It's a track that just doesn't "land" with me and I don't like the screamo-sections that much. "Jaded" is too acoustic as far as the atmosphere of the album goes. In their previous split-album with Satory, I found the acoustic version of The translator the weakest track of the bunch and on this album, this acoustic style track misses the splendid dark atmosphere that really defines this album.

Luckily, album finisher "Like Wildfire" brings back the goods with dark, eerie synthesizer sounds of floating ghosts. I sense some connections to the great track "For Darkness fears the Light" of their previous Split EP. Not only due to some lyrics in both tracks, but also the very recognizable (and short) guitar section at the 4:38 mark. Like Wildfire marks the end of this album and closes this book for now.

It's kind of funny to tell so much about the lyrics in a Postrock review, but it's one the most important parts of this album. I must say, it's refreshing. OCV has never been 100% Postrock, but with this album, they steer further away from this name without forgetting their roots. It's not an album that makes you see and feel the joys of life, how beautiful everything can be.... It's dark, moody, gripping and sometimes... uncomfortable. But is it not the feeling of grief, loss, despair that can make you feel so alive? That question lingers and OCV made the perfect soundtrack!