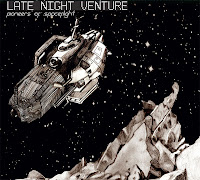 Denmark based Late Night Venture is one of the new major additions to the Dunk! label, the guys who organize Dunk! festival in Zottegem, Belgium. Well, regarding the line up of the four earlier editions, these guys know when they spot great Postrock music. Did they do a good job with Late Night Venture? Read the review of their second album called Pioneers of Spaceflight right here!


Late Night Venture (LTV) plays a combination of shoegaze and postrock with slight postmetal upbeat sections. It's a more diverse album than their previous offering called Illuminations, which featured only vocal tracks. I'm glad that LTV made the decision to add an almost 50/50 split between instrumental and vocal tracks, because the instrumental tracks are the best this album has to offer. This is not due to bad vocals or whatsoever, but the instrumental tracks (or low-level vocal tracks) just sound more creative and  mature. Opener Kaleidoscopes  gives a good impression of the quality of this band.


For example, I'm going to analyse the track Birmingham (listen above!). This track begins soft, with a xylophone(?) that's also used in opener kaleidoscopes, slow fingerpicking guitartunes, easy drumming... After the one minute mark, the track takes on a distinguished rythm that still sounds hopeful and cheerful, the rythm again varies at the two minutes mark with classic guitarwaves around 2:30 that's so well known within the genre. You immediately get the feeling this song will pop open to more epic proportions and yep, at 3 minutes, there's a a slight post-metal sauce poured over the xylophone and distorted guitars.... Around 5:40, the track eases of to a relaxed conclusion. It's a track with lots of different styles but the overlap between styles make this a coherent and very pleasing track. That's the true quality of this band.


The best track with vocals is Hours, which has a distinctive shoegaze style that sounds a bit dreamy, but still dark. It gives me a feeling of loss and slight despair. It sets a great mood and the added ambient tunes and the added heaviness of the guitars at the 6 minutes mark makes this another great track. It's a cool fuse of styles that works great.

Ready no and Trust are the weakest of the lot. The saving grace for Ready no are the great use of drums and dreamy bell-like sounds. The song Trust is a bit too emo for me. I was affraid that the album lost my attention after hese tracks, but luckily, I was wrong. The relaxed, almost ambient sounding track Glitterpony is a great warm-up for the best track of this album: finisher Carisma. Man... I love the piano at the beginning, the distorted guitars and uptempo but still soft-sounding drums. This track reaches its climax around 5:15 minutes and the build up to that point is fantastically well done.


The second album of Denmark based Late Night Venture is a great mixture of Shoegaze and Postrock. The combination of fully instrumental tracks (which are the best tracks on the album) and vocal-featured tracks, make this a great sounding and diverse album. Easily recommended for introducing the genre, but don't make a mistake here: even "old" fans have something dark and tasty here, which they can enjoy. Go have a listen and maybe buy the album here !
Dunk Late Night Venture Pioneers of Spaceflight postrock review Postrock Reviews