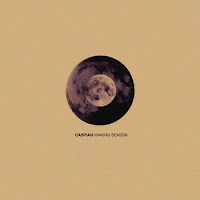 The new Caspian album "Waking Season" has been released. Read the review and listen to the best tracks here on Postrocker.NL!


Let's make one thing clear: Caspian is one of the biggest / best bands within the genre. It's not the (fantastic) mammoth that Mogwai is, but in respect of sheer quality, Caspian is up with the best of the genre. I bought the album blind on Itunes, so I could give it an immediate listen. All week, I've been listening to the magically new album Waking Season  and different stages of emotions, amazement, WTF-moments and pure bliss passed me by.


My initial emotion while listening was pure bliss. The first track I heard was Halls of the Summer, which begins very ambient-like, picks up speed and gives away relentless processed drums and piano sounds. It's a fantastic first taste (although it's track number four , but hey, it's fate that decided this was the first track for me to hear) of the album and sounds fresh, creative and utmost positve. By Caspian standards, it's a comfortable track with small segments of the familiar hail-like Caspian - guitar sound. After a first "shuffle" listening-experience, I was impressed!

The next couple of days were a bit odd for me. I listened to the album chronologically and had some quirks with it. Why is the build-up of opener Waking Season ending in such abrupt fashion? It doesn't connect to the second track Porcellous  at all and at first, it sounds way off. To be honest.... I had my doubts during these 2 days... I had to get used to the tracks Porcellous and finisher Fire made Flesh, which are sounding a lot more like Post-Metal with shredding guitars and heavy metal like riffs. I searched the internet and found out that Matt Bayles produced the album, who also produced  EP's for Russian Circles and ISIS... loud bands! It was like putting on Army boots when you're used to comfortable sneakers... but after a while they fit perfectly and you can walk for miles. That was the moment this album as a whole "clicked" for me. Put the album on repeat, play the final track and immediately listen to the opener again and enjoy the fantastic calming piano play... it's like a warm wind after hours of suffering in the cold. You're back and you've got energy enough to listen to the whole album again.

It took 2 days to hear the brilliance of variety in the order of tracks and the out-of-my-comfortzone switches between tracks. It's an album that had to grew on me but after I set some grudges aside, I was able to enjoy the fantastic 10-track album that Waking Season  is. A special mention for the track Long the Desert Mile, which has an addictive guitartune and great variety... the part between 3:43 - 4.40  is magical.... Wow!


Waking Season is an important album for Caspian. It took 3 years for its landing and it was time well spent. The (minimalistic) added vocal(samples) on the tracks Porcellous, Gone in Bloom and Bough, and the fantastic ambient track Collider in Blue, The Sigur-Ros-esque chanting in High Lonesome and the great use of piano sounds make this album the more diverse and put simply... a step above their already fantastic earlier albums. I couldn't find myself listening to other albums anymore. This week, my Postrock adventure was single-handedly occupied by Caspian - Waking Season!