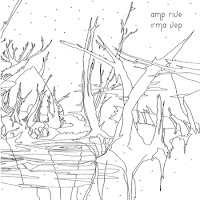 Be ready for this Italian masterpiece by the band Amp Rive. This is how emotional and great Postrock can sound! I wrote about Amp Rive in the july / august music submission  where they shared a cool video for their track Best Kept Secret and I was impressed with the quality of this video and the track. I listened to their album and reccommended this band to all Postrock fans. I want to add up some spice by reviewing their album. They deserve more attention.

This week, I started to listen to their album again and it hit me: this band is one of those hidden gems in the scene. Amp Rive made an album that's a tour-de-force of feelings and thoughts of sadness and joy. I can't decide what emotion has the upper hand. It's great music but there's a hint of despair and melancholy in their tracks. It's this refreshing combination that makes this album stand out.

Opener Procession  starts out odd with a rough sounding synthesizer and fast paced tunes. The synthesizer is quickly placed more in the background and the guitars take over the song. At the 2:35 mark, the song takes itself to a first climax of half a minute and then eases in a much slower affair, only to build up to another climax at the 4:50 mark. The synth-sound is still there but much softer, different guitar melodies blend to a perfect mix of tunes that gives a first taste of the contrast between the feelings I have.

Best Kept Secret  kicks in and is a fantastic track on its own. Especially the second part of the track is a combination of a dream-esque lead guitar,  finger-picking tunes in the background, the build up drums.... combined, the track evolves in a fantastic climax that makes it one of the best tracks of the album.

Third track, A sort of apology, is a powerful souding track that keeps itself within the postrock-atmosphere. There's a temptation to step into the post-metal sound, but Amp Rive keep the sound within the postrock boundaries, that makes for a track that's interesting. I really digg the slightly distorted guitars ala Mogwai, but Amp Rive is very subtle with this. At 4:10, the track seems to end, but it's only a calming intermezzo to open up a soundscape with 3 different guitars to a great section that fits well within the total composition of this album. The well known Postrock guitar waves are there, but very subtle and they only add to the feeling of despair.

The 8+ minutes track Clouded Down is a song that initially gives me a joyous feeling. Uplifting drums and guitars make up for a sunny atmosphere. At the 4 minutes mark, the track turns in a more melancholic atmosphere and ends rather sad and quiet... in a good way. I would be very interested about the stories behind these tracks.

If starts rather up-tempo with big bass-drums and, compared to the rest of the album, pretty heavy guitar sounds. The track constantly transforms to faster and slower rythms, but it still sounds as one complete composition. The track's highlight is around 5:45 and it eases off with a floating-like synth wave.  It sounds great as a whole.

The final track is called  The Apocalypse in F and takes its time before showing its full potential. Stick with it because when the drums start taking off at the 2:40 mark, this track transforms in an almost epic track with everything that makes this band great. The collaboration of different guitars, the drums and the synthesizer sounds great. After this highlight, the track transforms again for its epic conclusion which has a lot of resemblance to the finishing section of the seonc track, best kept secret, but with higher pitched guitarwaves.

And the interesting part... tracks Procession, Best Kept Secret, and The Apocalypse In f all feature almost the same sounding endings with the same rythm and slight differences in guitar and synth sound. It's a nice touch that gives the album a very cohesive  feel. Maybe there's a connection with the annagram of their band name and album name?

Joy or sadness... I still can't decide which feeling has the upper hand. What I do know is that this album is a fantastic creation that you have to listen to a couple of times to really discover the best qualities this album has to offer. Open up to Amp Rive and drift along on this emotional trip. I think they signed with a label, because the album was available in August, but now it has the pre-order status on Amp Rive - Bandcamp and there, you can read that the album will be released on 14 december. Well, never mind, this album is worth every euro / dollar you can spend!