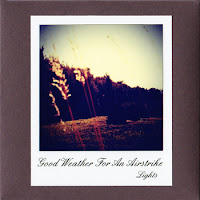 Anonther month, with lots of new music in my mailbox. I'm here for you guys to share! Read about the good stuff of 8 bands like Dresda, Good Weather for an Airstrike, Svarta Stugan and more!


Let's start with the best submission this month... Italian based Dresda! Wow, this is available free to download on bandcamp and I suggest you do it now. Dresda is a rather "classic" sounding Postrock band  tthat mixes things up nicely with the use of pianos and the sound of children playing as an added loop in some of their tracks. Best track on the album is the titlesong of the album and is called Diluvio which lasts more than 10 minutes. It's a perfect example of the quality of this band. I like the dreamy shoegaze atmosphere without losing their postrock roots.The piano has an important role, which is also the highlight of this track. Grab their album (name your price, so "€0" is an option) at Dresda - Bandcamp

2. Good Weather for an Airstrike


Another band in the portfolio of Sound in Silence Records, who also host Good Weather for an Airstrike. This project is a collaboration between two one-man bands and mixes ambient with distorted guitars for a moody atmosphere. It's the perfect escape form your busy day-after-day life  and is best enjoyed in a dark room with candles and a smoke whiskey. Recommended! Yellow 6 & David Newlyn - Bandcamp

4. Svarta Stugan
This great stuff... I have a crush on the movie Blade Runner  and Henrik, one of the guys from Swedish band  Svarta Stugan  mailed me their music is also inspired by this fantastisc music. Well, you dserve a mention on this website then! The Blade Runner influences can be listened to in the track End Titles  at the 3:10 mark, but the best song of this noice / experimental / postrock band is the first track called "Main Theme" Instead of a Bandcam embedded-track, let's spice things up with a rather well done stop-motion video that accompanies this track. Svarta Stugan - Bandcamp


North Carolina based MAKE sounds like a combination of doom / metal and slight postrock influences. The track above called Axis  is one big and loud soundscape full of guitars / percussions / loops and a haunting atmosphere. It's great instrumental doom-metal track that has a certain quality to it. Other songs also feature screamo / grunting sections if you like it loud. Check them out on The Band MAKE - Bandcamp

Another pretty loud band from Poland this time. God's Own Prototype (which would make for great band tees I guess) sounds as a combination of post-metal and progrock. It's an odd combination that works rather well. The ambient factor comes in the form of a couple of very short intermission-tracks that  break up the album for the klonger and heavier sounding tunes. Not exactly my style, but I can easily hear this band would do great with fans of the more uncompromising louder stuff.


It's always a good thing to be able to suport Dutch / Belgian acts, no matter the experience of the composer. That's not to say anything direct about the quality of this music, but I can hear that this guy is still experimenting on things. This free to download digital album feels like a prototype for bigger things to come. It's ambient / postrock with calming fingerpicking tunes that sounds rather good. Be sure to support this guy by listening to his music on Bandcamp and like his page on Facebook !


These guys from Florida asked me to feature their music and suggested 2 songs to share. Well, one song is above and it's pretty good. Don't think this track is representative for the rest of the album, because it's clear they're experimenting with their sound. A lot of different instruments and synthesizer loops can be heard throughout the album and make up for an interesting mix of songs. It's not exactly my cup of tea, but hey, every good song is worth a listen to so you'll do great by listening to the track above: "Through to Sunrise"  The Soft Breaking - Bandcamp