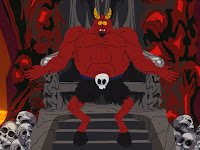 Read about and listen to the best Mogwai track ever: "Fear Satan"  Studio and live version included!

Mogwai, one of the leading bands within the Postrock genre. The guys from Schotland released their debut album "Young Team" in 1997, a creative and diverse album from a promising band that turns out to be one of the biggest in the genre at this moment. I never gave this album a good spin and boy, I missed out on some great music. After hearing Mogwai live at 013 - Tilburg  this year and hearing the live performance of Fear Satan, I immediately fell in love with this track.  Fear Satan is the last track of the album and represents all that is great about Mogwai. Relentless, and I repeat: relentless drumming, a fantastic guitar riff that lasts for ages, the distorted (and distinctive Mogwai) guitars, and the flute, wow, the flute.... After a couple of minutes of epic awesomeness, there's a long segment that's rather quiet and relaxed and it's the moment when the flute comes in. It's the perfect transformation from the loud guitars to a tranquil sound, without losing the active drumming. 2 minutes after the flute, the climax of Fear Satan kicks in and the only two things you can do is raise your fist in the air and wobble your head like a freaking maniac. It's ten thousand pounds of hapiness that splits your skull! At around the 9 minutes mark, there's the tranquil flute segment again that keeps going on and on untill the sonic beams pop up to end the track.

The live version that I've seen has a slightly different build up as you can hear below (no flute here) and it's 4 minutes shorter (12 minutes in total) than the album version. Never mind, it blew me away and got me to really listen to this great first album of Mogwai. I'm thankful for that, it's one of the best tracks in Postrock  history!