mei 10, 2013
A cool interview with the founder of Atlantis. Read all about the new album La Petite Mort, his inspirations and much more.
Could you explain the title of the new album “La Petite Mort”? Do you want to even score with something / someone and does this explain the more relentless sounding tracks?


Gilson:The title stumbled upon me and it always stayed in my mind. “La Petite Mort” sounds both serene and macabre, plus I thought it fitted the tracks on this album. I’m not settling with someone. The tracks that keep upright during the process of writing, are those songs that are connected to a state of mind I’m in. This can be relaxed / calm as heard in the track “Everest” or a more difficult period as with the track “Esther”. In comparison to the last albums (Mistress of Ghost / Carpe Opium) there isn’t a concept per se.

I’ve seen you five times live and always in the co- / support act role, or in the line-up of a festival. Have you got any plans to tour as a main-act in the future?


Gilson: There are plans. If we tour abroad, we’ve been regularly booked as a headliner , but I have to say that it doesn’t matter to me whether we’re booked as an opening act. It’s always a challenge to win a new crowd. When we’re playing as a headliner, it’s possible to play a set as we envisioned it, which is always important for us.

What inspires you to write tracks? “Esther” sound pretty dark and full of anger. Is your music a way to write of memories / emotions for your personal life?


GilsonYes, I think so. It’s a creation that originate from an emotion or situation that I’ve experienced, which comes into expression in this kind of songs. I’m hoping that the music tells the stories, but… I’v heard and read about the weirdest interpretations of our songs. That’s kind of cool, because of the fact that the music is almost fully instrumental. Everybody can interpret its own story to the tracks.


What’s your favourite venue / performance and can you tell me why?


Gilson: That’s a difficult question… We did a lot of great shows already, with a few very memorable ones. Being able to perform at Roadburn 2012 to close our recent tour was great, because it was in the same venue where we did our first gig back in 2007. First time performing in Berlin was awesome, Dunk!Festival… being support act for “Unsane”, because they are heroes to me and a couple of members in the band. But the first show that springs to mind, was during our last tour in our second-last show in Oberhausen … that was really bizarre and a great show for us on all fronts.

What do you think of the Postrock / Noise / Instrumental scene in the Netherlands? Is there something in it for you, or is the scene more healthy in other countries?

Gilson: Honestly, I don’t consider Atlantis as a Postrock band, and I don’t think I can name more than 3 bands from the Netherlands, but I’m noticing that the genre is growing with a lot of bands that sound very similar to my opinion…. But at the same time that’s a good thing because the highlights really stand out. Maybe there’s something in it for us, but Holland is small and the first thing to do is getting well known, but not trying to be the band that only acts as a support role for a bigger band in the same genre, because the public can get tired of you.
Performing abroad is very attractive, but is only possible while touring. That’s awesome, because I really dig touring. Every tour, we’re finishing off in a venue in the Netherlands… we’re trying to combine everything!


The synthesizer is one of the most defining sound of the band. Are there instruments which are dictating the way you write a new track?


Gilson: No, not really… I try to keep away from writing a track from the perspective of a guitar-player. What I like about writing in the way I write for Atlantis, is that I’m not restricted to a guitar or synths… Sometimes, the synthline is a fundament for a track, in another moment it’s a soundscape, the beat… or a guitarriff. There’s not a standard way of writing for me.


You’ve worked with the singer of “Cult of Luna” (Johannes Persson) for the track “Esther”. Do you have more wishes regarding a collaboration?

Gilson: Yep, I’m always open for more collaboration. On “Mistress of Ghost”I’ve worked with an artist named “Big” from Bremen, Germany, for the track “She Loves All”. Initially, there was another collaboration for a track, but the schedule of the singer and the deadline for release of the album didn’t match… so maybe in the future…But if a song requires something that I can’t off, I’m always searching for a collaboration!

Who do you think is leading / defining within the instrumental genre?


Gilson:“Mogwai” is the first act that comes to mind, because when I learned of them, it was the first record within the genre… and of course “Slint”, not instrumental, but without “Slint” there’s no “Mogwai”… “Bohren & Club of Gore” are also highlights. I don’t listen to a lot of music within the genre, mostly cinema-music and electronic artists like “Burial” “oOoOO” and “Balam Acab”.


What do you think of expanding your live performance with visual effects? If that sounds interesting to you, what kind of images can we expect?


Gilson: We have a couple of plans, but we’re really critical. It has to be perfect for us, we don’t want to be “one of the bands” with some visuals of war, psychedelic movies and stuff. If we achieve the kind of thing we want, it’s going to be awesome!


How will you expand with the band? Touring more often, discover new areas / countries?


Gilson: We have some conversations with countries where we haven’t been before, so I’m hoping that, before the new release in 2013, we’re able to discover some new areas and meet new fans. We also would like to play at places / venues where we’ve been before!

Berrie:Thanks a lot for answering my questions!


Must Hear Postrock: The Shaking Sensations - Things like these kept you safe 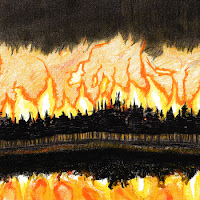 I'm back from Ukraine and had a wonderfull experience driving around the country with my best mate. During the trip, I've listened a lot to Postrock and there were 2 tracks that will stay with me forever reminding me of this fantastic experience. One track is from The Shaking Sensations - Things Like these kept you safe. Read about and listen to this wonderfull track right here!

The Shaking Sensations is a fantastic Postrock band from Denmark which I saw live once in Tilburg, the Netherlands. On their debut-album "This is your helffire Religion!" the final track is totally awesome. It's pretty classic Postrock, but the thing that makes this track special is the smooth opening of the track with the cool rythm of the drums and a nice guitar tune. During the track, the band puts layer on layer of guitars and drums to the track and makes it stand out from the crowd. It's a great track to inspire people to listen to Postrock for the first time. I once read that Postrock is like classical music for the rock-scene and this track nails that motto. For me, from now on this track will remind me of my wonderfull time in Ukraine and I'm glad to discover this rare beauty of a track! Be sure to listen this track with a quality headphone or just put your speakers on max volume... it's totally worth it.

You can buy the album "This is your Hellfire Religion" for €4 on The Shaking Sensations - Bandcamp!

Be sure to check out two live performances made by myself here and here!