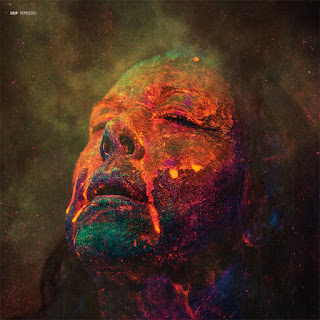 Soup, a band from Norway which has a pretty long track record now. I've known them since their release of Children of E.L.B. with a special mention to the track: "We share the same breath".  Soup plays a mixture of Postrock / Indie rock / progrock with vocals. For me, Soup was an interesting band to listen to once in a while as the atmosphere is generally uplifting, emotional and energetic. With their latest release "Remedies" , this band made a lasting impression on me. Since SPOIWO's excellent 2015 release "Salute Solitude", I haven't been as psyched about a release until now, with Soup. Find out why.


First things first: the artwork is fantastic! It captures the attention and it tingles the senses. Just look at the cover photo, it has the same impact on me as the magnificent cover for "Young and Courageous"  by Tides of Man. This is the kind of cover that grabs your attention should you see it somewhere online or in a record store. It helps that the artwork is created by Lasse Hoile, who created artwork for Porcupine Tree, Blueneck and many more. He did an excellent job of creating an image that suits this magnificent album. Onward to music now!

To summarize: this album is a combination of dreams and melancholic tales, with great story-telling in the vocals and the instrumental parts. It's music that isn't shy to build-up layer after later, it has Postrock, psychedelic rock and definitely some 70's rock elements in it. Featuring angelic vocals, mainly during the beginning of each track, the songs develop into instrumental masterpieces with great pay-offs. In general, to get you excited, the former  two sentences should be enough for you. If you want to read more, please do read my analysis of each track and my search for the story behind this album.


Opener Going Somewhere starts with those fantastic, almost angelic vocals.  The beauty of this track is the split between the vocals and instrumental parts. The first 50% features the story in lyrics, the latter 50% is fully instrumental and it occurred to me that the instrumental part has the same build-up as the vocal part. As if the latter instrumental segment ( from 4 minutes and onward) tells the same story as in the vocal segment. This first song immediately shows you the beauty of each layer that this band builds on top of another. Just wait for it and drift away from the 5:40 minutes mark and onward to the end. You'll feel this music. After 7:45 minutes, the track ends with a soothing salute to the tale. And that tale, that's pretty cryptic. I see it as a story about someone who isn't comfortable with its own identity / doesn't know his place. He needs someone to guide him and show the true meaning of his actions and life. The passage: ..."I know it's hard to pretend when the palms you see are sweaty and alien" puts me on this road.


My personal favourite is the second track called The Boy and the Snow. To truly understand this song, I've made to many notes that's like a labyrinth. It's something I cannot crack yet. This track starts with a dream-like atmosphere due to the tempo and quiet bells / piano.It sets the stage for some mysterious feelings. The track certainly takes it's time, but after the 3:06 minutes mark, some beautiful expansive sound can be heard that will be reused a couple of times.  That's when this track opens up a bit, only to quiet down again with another vocal segment. From the 6:20 minutes mark you hear the first (and rather quiet in the background) psychedelic influences on this album, which culminates in the fourth track.  At first, this track sounds like a melancholic but rather uplifting song, but I think that's not the case. At the 8:20 minutes mark, the feeling of urgency is growing and growing. The track becomes more immediate, as if to shout at someone to listen, as if the singer / writer wants to force (lost) advice on a desperate person. That's when the climax of this track kicks in and it's harrowing but beautiful. Themes that crossed my mind during this track are: a parenthood gone bad,  leaving someone behind, a brother who lost his younger brother and blames his parents, even suicide? Pretty bitter I guess. Nevertheless, a magnificent track.


As an interlude, there's the 2 minutes track called "Audion" and I guess they recorded it somewhere on a big organ in a church in Norway. After the urgency of the second track, this is your time to come to terms and rest a bit. Or is it a direct connection to a sermon of someone's passing?


The fourth song called "Sleepers" will be the track that most people will like, I guess. It's as if Porcupine Tree and Pink Floyd made a Postrock track! This is a track full with psychedelic and 70's rock sounds. The star of this track is the bass-loop starting at 4:50 minutes, it's intoxicating. Dare to wobble your head on the rhythm and I guarantee you cannot stop until the end of this magnificent track. This track has the same 50/50 split like the first one. The first minutes are focussed on storytelling by the singing and the lyrics, at the 4:50 minutes mark, when that awesome bass can be heard, the track is fully instrumental and seems to "mimic" the vocals part in atmosphere.  After the 6 minutes mark, the psychedelic parts shine through, in combination with distorted sound-effects. An excellent showcase of the diversity of this album, but Soup protects the atmosphere of the album and succeeds. I can even dig the weird shift in sound in which this track ends, it makes this track a notch more sinister.  I struggle again with the emotions and story of this track.  Loneliness and unresolved anger towards someone seems a good description.


Album finisher "Nothing like home" is a bit of a change in style. On my first couple of hearing-sessions, It seems that this track didn't "fit" in well. Thank heavens for repeating listening sessions, because yes, I got used to it and I like it on it's own, weird shift in style. Quiet, finger-picking guitars and soothing vocals set the stage for the first half of this rack. From 3:15 minutes and onward, the track shifts to a retro-style psychedelic track with passionate guitars, a flute and some quiet strings to listen to. The track fades out quietly and brilliantly. A track that would make Peter Gabriel of the 70's, proud.

This final track let's me decide my point-of-view for the story and theme of this album: I'll stick with the "older brother loses younger brother (maybe not physically, but mentally), blames his parents / a parent and leaves them / him / her. The sentence..."Pray all you want, now we're going. Now that we're gone, can you see it's fading?" gives me some confidence in the central theme for this album. But hey, as always with fantastic music:  You can create your own stories and associations . And that's another great element of this release:  you can ponder your own thoughts, while enjoying one hell of a great album. A must buy for sure!
postrock review Postrock Reviews Soup Soup Remedies